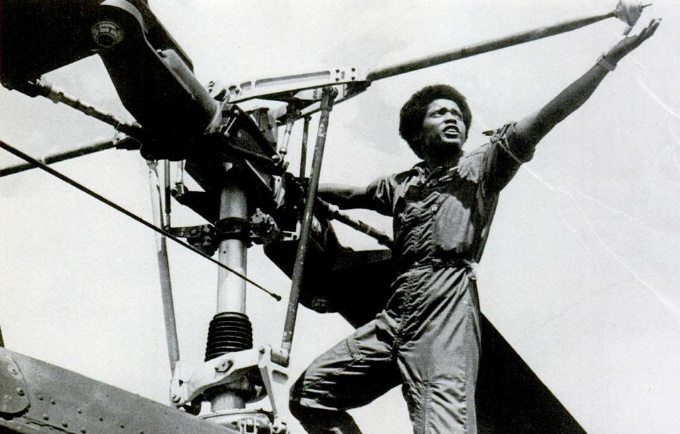 In her hometown of Centralia, Mo., Marcella Hayes Ng was a tomboy, a tree-climber who played tackle football with her cousins and who liked to watch her grandfather work under the hood of automobiles.

She was raised with the mindset that she was equal to everyone, but that God was superior to all.

“I grew up as a kid with rose-color glasses. The sky was always the limit.”

But even with the sky as the limit, as a youngster the thought of learning to fly never crossed her mind, let alone dreaming of making history in the U.S. Armed Forces. She did both simultaneously.

In November 1979, Ng, who was 2nd Lt. Marcella A. Hayes at the time, became the first African American woman in the U.S. military to earn her aviator wings when she completed helicopter flight training at the U.S. Army Aviation Center, Fort Rucker, Alabama. She was 23 years old and had been in the Army about a year. Flight school to her was “another cool wicket to go through.”

“I really didn’t know I wanted to fly,” Ng recalled.

Ng graduated high school in Columbia, Mo., where she moved as a young teen. She was a member of the National Honor Society, the pep squad and the marching band, and was accepted by three universities when she applied. She chose University of Wisconsin in Madison, attending on a ROTC scholarship. She did okay academically but she excelled in military training, and was one of only two women accepted for the Tri-Service ROTC Exhibition Drill Team. She excelled in leadership at ROTC Advanced Camp at Fort Riley, Kansas, in the summer of 1977. Because she’d been a member of the university’s drill team, leading formations at camp came easy to her. She was recognized for those leadership skills early and made Cadet Company Commander for the Parent’s Day parade. Following Advanced Camp, she went to Fort Benning, Georgia for U.S. Army Airborne training.

“All of it was fun because I got to rappel at camp and I got to jump at Benning,” Ng said.

Her voice is full of energy and excitement as she recounts her youth, her ROTC and Army days. She’s quick to pepper her story with names of people who helped her by serving as role models or encouraging her. A key ROTC cadre member from the Advanced Camp was Lt. Col. Robert “Bobby” Pedigo, an Army aviator, who introduced her to the idea of applying for flight school upon her graduation and commissioning. For the first time the seed of flying was planted in Ng’s thoughts. Thanks to the assistance of her college best friend, Steven Mattox, and other ROTC cadets and leadership who motivated her, she also attended and graduated jump school.

“God was allowing me, although I didn’t realize it at the time, to become a shining star at the camp,” Ng said.

Women were new to Army aviation. By the time Ng arrived at Fort Rucker in 1979, it was only the fifth year women attended the school. She was paired up with many fair-minded instructors, but Robert Stamper, her instruments instructor, helped prepare her most for what would become an historic achievement. And when advanced instruments instruction wasn’t clicking, fellow classmate Dave Boydstun stepped in and explained it in a way she understood.

Ng recalled that on what was to have been her instruments check ride — her advanced Instrument flight examination — she was elated to have one instructor whom the class nicknamed a “Santa Claus” because of his generosity. However, the instructor called the flight off due to weather. She was rescheduled the following Monday with another examiner whom her classmates said took pleasure in failing everyone. He was a much tougher examiner. When she finally did take her exam, she had the best takeoff she ever had under instruments. The flight went perfectly in spite of changing flight plans throughout the check ride. It mirrored real world situations, and when the flight was over the instructor chose to show her other skills in the cockpit. She credits her success to God.

Flight school was exciting. It also played a large role in her personal life. She met Dennis Ng there in the summer of 1979 and they were married in January 1980. The following summer Marcella was assigned to Germany with the 394th Transportation Battalion, its first African American and first woman. She wanted to continue to fly. Despite her efforts, however, she repeatedly was told she didn’t meet the standards. She lost her flight status, and it hurt deeply.

But Ng took stock of her situation and reprioritized. She focused on her family and other opportunities the Army offered. At a new duty station at Fort Hood, Texas, she was evaluated by combat arms officers and selected for company command for two years. She followed with other command positions in Korea and in the U.S., including the 49th Transportation Battalion commander at Fort Hood.

“God opened doors so I could command a battalion,” Ng said.

Marcella Ng retired Sept. 30, 2000 as a Lieutenant Colonel, and Corps Support Command Inspector General. Her husband Dennis also retired as a lieutenant colonel, in 1996. They live in Nolanville, Texas, outside Fort Hood. The couple has three children and 11 grandchildren.

Ng has long since stopped flying helicopters. But she doesn’t sit still. Her flying today is on the ground, either on foot chasing her grandchildren, managing the family’s event venue business, or riding with the Christian Motorcyclists Association, a Christian ministry.

“I fly on my motorcycle,” she said. “And I’ve learned that when I started truly listening to God, He taught me to make lemonade with life’s lemons.”