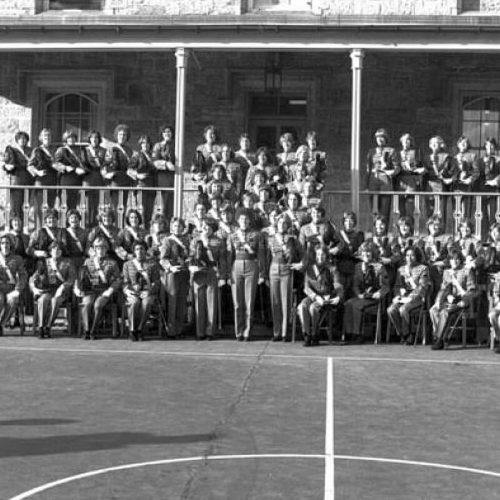 On May 20, 1975, the House of Representatives approved an amendment to the Defense Authorization Bill of 1976, opening the service academies to women. The Senate followed suit on June 6, 1975, and President Ford signed the bill on October 7, 1975.

The first women cadets arrived at West Point on July 7, 1976. Four years later, 62 of those women graduated on May 28, 1980, and were commissioned as second lieutenants.

The first women cadets arrived at West Point on July 7, 1976. Four years later, 62 of those women graduated on May 28, 1980, and were commissioned as second lieutenants. The names of the first women to graduate from the United States Military Academy in the Class of 1980 include: 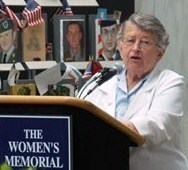 SGM Grace Mueller, USA Retired served on the WAC Foundation and Army Women’s Museum Foundation boards of officers for over 30 years, and was elected to Director Emeritus upon retiring.

Grace was born May 17, 1917 in Cleveland, Ohio. She was working in Batesville, Ind. at the Batesville Casket Company when she heard a radio announcement that the Army was accepting women enlistees. She enlisted Aug. 1, 1942, and was in one of the early basic Women’s Army Auxiliary Corps training classes at Ft. Des Moines, Iowa. She served at Ft. Sheridan, Ill., Ft. Custer, Mich., and Camp Bullis, Tex. before discharge in 1946 as a first lieutenant. She returned home to Indiana, but did not stay long. She reenlisted under an option that allowed former Woman’s Army Corps (WAC) members to rejoin the Army and was assigned to Ft. Meade, Md. With the passage of the Women’s Armed Forces Integration Act in 1948, women were accorded permanent status in the military services. Now a member of the Regular Army, Grace was assigned to the newly established WAC Training Center at Ft. Lee, Va. She subsequently served at Ft. McClellan, Ala., Ft. Myer, Va., Ft. Ord, Calif., and with 8th Army in Yokohama, Japan. Her last assignment, as a sergeant major, was on the staff of the WAC director. She retired in March 1973.

Very active in retirement, she served for 30 years on successive Army Retiree Councils in the Washington, D.C. area. She delivered meals on wheels and was an active member of the Ft. Myer, Va. Chapel. In 2011 she was inducted into the Army Women’s Foundation Hall of Fame, joining other Hall of Fame honorees BG Pat Foote, CSM Cynthia Pritchett, Brig. Gen. Wilma Vaught, and LTC Tammy Duckworth. The women of the West Point Class of 1980 were also inducted in 2011.

She was a long-term WAC Veterans Association member with Northern Virginia Chapter 33 and held many chapter offices, including president (1988-89). She was a charter member of the Women In Military Service For America Memorial Foundation. She’s survived by her nephew Lance Mueller and wife Jamie, her niece Judy Rhodes and husband John, and many other family members and friends.

She was living at the Armed Forces Retirement Home in Washington, D.C. at the time of her death in 2012. She will be long remembered for her service to her country, her love of family, her dedication to veterans, especially women veterans, and insightful ability to get to the heart of complicated issues.