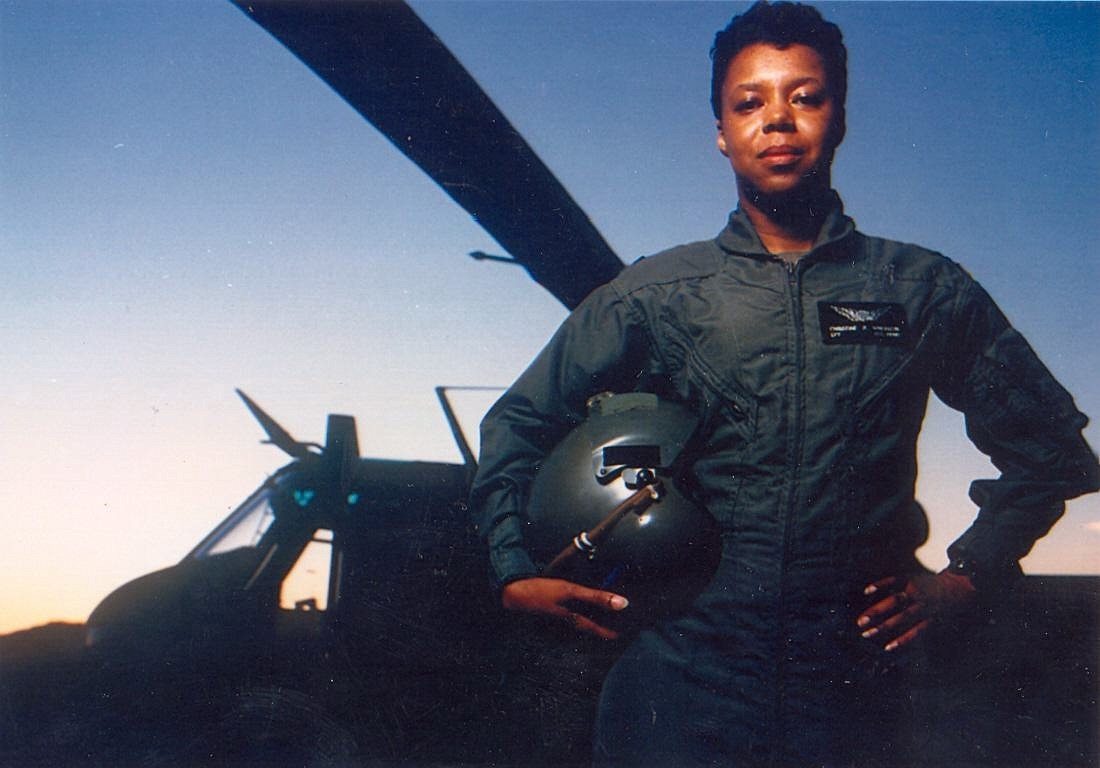 From her humble childhood in rural South Georgia, retired Army aviator Christine B. “Nickey” Knighton has soared to great heights.

But one of her proudest military accomplishments was one she shared with an entire unit that was held up as a model for the Army.

Knighton served more than 29 years in the U.S. Army, retiring in 2008 as a colonel. She discovered the Army in college when she joined ROTC at Tuskegee Institute in Alabama, where she was a Distinguished Military Graduate in 1979. Intending to study education and return home to teach, she initially joined ROTC for college credits and to satisfy her curiosity. It later became an economic necessity.

Although she’s traveled far from her rural deep south, she hasn’t left it behind. Knighton started a public service nonprofit organization to help lift young people so they can reach their potential.

She likens her journey to author Richard Bach’s title character in his book “Jonathan Livingston Seagull,” a character who sought a higher purpose in life.

Nickey Knighton’s humble beginnings in rural Cuthbert, Georgia never held her back. Her single mother always maintained a positive attitude and instilled in her three children a belief that they could achieve whatever they wanted. Knighton’s mother not only set the tone for success for Knighton and her two sisters, she also set the example of how to dream big, set goals, and achieve them. Knighton’s mother worked hard in the textile mills, and as a single parent in the 1960s, bought a home, a 12×60 foot, 3-bedroom “trailer house.” There was no division of labor or possessions by gender because theirs was an all-female household, which had its advantages. “There were just things … and things that had to be done around the house and only us girls to do them,” Knighton said.

When Knighton considered applying for flight school, she asked her mother, “What if I fail?” Her mother’s answer came in the form of a question: “But, what if you succeed?”

Knighton relied on this positive attitude to negotiate the hurdles of being a black woman in a predominantly male Army while in flight school.

“Graduating from flight school was enough of a challenge for anyone,” Knighton said. “My focus was just to keep my eyes on the goal and not let other people’s prejudices or problems become mine.”

Knighton made history again 16 years later when she assumed command of 2d Battalion, 227th Aviation Regiment, a Blackhawk Helicopter Battalion in 1st Cavalry Division, Fort Hood, Texas.  On Nov. 3, 1996, then Lt. Col. Knighton became the first woman in the history of the U.S. Army to command a tactical combat arms battalion. She deployed the battalion to Tulza, Bosnia-Herzegovina to conduct aviation operations in support of 1st Cavalry Division and NATO. She relinquished command in November 1998, and in March 1999, 2d Battalion, 227th Aviation was selected as the Army’s Aviation Unit of the Year.

She is married to retired Army Colonel Bennie Williams. The couple has a son, Tré, who is in the ROTC program and a senior in college at Hampden-Sydney.

Even with a host of achievements on her resume accumulated over three decades in the Army, Knighton isn’t finished working. She is inspired to continue to serve, focusing on elevating young people. She established a nonprofit organization called SHAPE to help residents in southwest Georgia. SHAPE stands for Knighton’s core beliefs: Self-Esteem, Harmony, Awareness, Pride and Education. Founded in 1990, SHAPE provides undergraduate educational opportunities to graduating high school seniors through scholarships and by providing computers and Kindles for some of them to take to college in their freshman year. Teaching and making a difference in the lives of children are Knighton’s top priority.

Rather than falling through the cracks, Knighton succeeded, she said, because of the support of a caring community and the “hopes, prayers and encouragement” of her mother. “In a trailer home on Third Street, I learned that there is power in believing in your greatness and striving to do the impossible,” Knighton said.

“ … My mother didn’t set out to create an Army officer, a social worker or a program manager in her three daughters,” Knighton said. “But, what she did set out to do was to create for us a beautiful childhood; an appreciation for our wonderful world; and the opportunity for us to create our own great adult lives.”