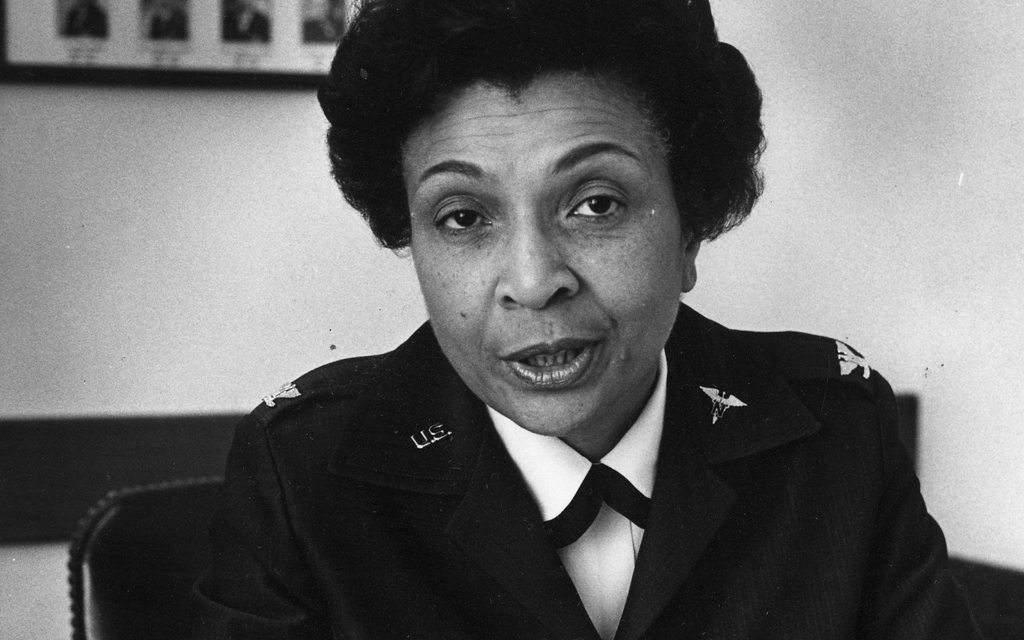 Hazel Winifred Johnson entered the world on 10 October 1927 in West Chester, Pennsylvania, and spent her childhood nearby in the rural Quaker town of Malvern. Johnson’s close-knit farming family included her parents, Clarence L. Johnson Sr. and Garnett Henley Johnson, her four brothers, and two sisters. Discipline, diligence, unity, and the pursuit of education were important household values. All family members worked their acreage while holding down other jobs in the community. Johnson, for instance, cared for her siblings and cooked, cleaned, washed, and ironed at home. She found domestic work outside the home when she was twelve years old. As a child, Johnson set a goal to become a nurse. She first applied to the Chester School of Nursing but was denied admission because she was African-American. Steadfast in her resolve and transcending many obstacles, she instead began training at the Harlem Hospital School of Nursing in New York, graduating from this institution in 1950.

After graduation, Johnson spent three years working in Harlem Hospital’s emergency ward. She then returned to Pennsylvania. She practiced on the medical cardiovascular ward at the Philadelphia Veterans Administration (VA) Hospital and became head nurse within three months. At the same time, Johnson began coursework toward her baccalaureate degree in nursing at Villanova University. While working at the VA, Johnson also became intrigued by the variety of opportunities and travel offered by the Army Nurse Corps. She joined the Army in 1955 serving first on the female medical-surgical ward at Walter Reed Army Medical Center and subsequently on an obstetrical unit at the 8169th Hospital in Camp Zama, Japan. Although Johnson soon discovered that obstetrics was not her “bailiwick,” and asked to never again work in that specialty, she deliberately finished that assignment with her typical sense of commitment. Following her initial tour in 1957, Johnson left the Army and returned to her prior civilian employment at the VA, continuing her part-time study at Villanova. Then in 1958, she committed to the Army Nurse Corps’ Registered Nurse Student Program that offered financial assistance for those with a nursing diploma who were pursuing a baccalaureate. Johnson earned her bachelor’s degree in nursing in 1959 and returned to the Army for a tour of duty at Madigan General Hospital, Washington, followed by attendance at the Operating Room Nurse Course at Letterman General Hospital in San Francisco, California. From 1960 to 1962, Johnson served as an operating room nurse at Walter Reed. Always focused on expanding educational horizons, Johnson spent the next year at Columbia University’s Teachers’ College where she earned a master’s degree in nursing education under the Army Nurse Corps’ aegis in 1963. From then until 1966, Johnson taught operating room students at Letterman. In 1966, she accepted a special assignment, evaluating the MUST (mobile unit, self-contained, transportable) hospital destined to become the 45th Surgical Hospital in Vietnam. Johnson hoped to accompany the hospital as operating room supervisor but fell ill with a lung infection. When recovered, she instead took charge of central material services at Valley Forge General Hospital, Pennsylvania, remaining in that position until 1967. For the next 6 years, Johnson served as the first nurse on staff at the Medical Research and Development Command. As the director of the Field Sterilization Equipment Development Project, she delved into problems such as those encountered with the use of ethylene oxide sterilization. In 1973, the Army directed Johnson to begin coursework for a PhD at the Catholic University of America. Johnson subsequently became director and assistant dean of the Walter Reed Army Institute of Nursing in 1976. Concurrently, she presided over the school’s closure and researched, wrote, and defended her dissertation in 1978. From 1978 to 1979, Johnson served for a year as chief nurse of the 121st Evacuation Hospital in Seoul, Korea. Few were surprised in 1979, when the Army nominated Johnson to become the 16th chief of the Army Nurse Corps with an accompanying promotion to brigadier general. She trail blazed as the first African-American lady and the first chief with an earned doctorate in the Department of Defense to achieve that distinction. During Johnson’s four-year tenure, Colonel Virginia L. Brown served briefly as assistant chief of the Army Nurse Corps followed by Colonel Connie L. Slewitzke.

During her tenure as senior leader of the Corps, Johnson’s accomplishments were diverse and noteworthy. She fostered the opening of access to academic scholarships for Reserve Officer Training Corps (ROTC) nursing students and established a clinical nursing summer camp for ROTC cadets. She published the first Standards of Practice for the Army Nurse Corps. She encouraged further development and implementation of quality assurance measures in treatment facilities. She arranged the first Phyllis Verhonick Nursing Research Symposium and encouraged Army nurses to implement research, write, and publish their findings. She generated the initial blueprint for the first Strategic Planning Conference that vested representatives of the rank and file of Army nurses with shared responsibility for planning the immediate future of the Corps. She promoted the movement to replace Army Nurse Corps-based specialty courses with graduate education in civilian academic institutions. She laid the foundation for expanded involvement of Reserve and National Guard nurses in top management positions. Johnson retired from the Army Nurse Corps in 1983. However, she remained enormously active on nursing’s national stage.

The profession promptly approached Johnson to assume new challenges. The American Nurses’ Association asked her to act as an administrative consultant and later as director in their office of Governmental Affairs. Also in 1983, she accepted an appointment as assistant professor at Georgetown University School of Nursing. She subsequently embarked on a full professorship in the School of Nursing at George Mason University. In 1990 during Operation Desert Storm, Johnson’s patriotic commitment again became manifest when she volunteered to work in the surgical suite at Fort Belvoir, Virginia’s, Army Hospital. On a personal note, Johnson was married briefly to David Brown but the union ended in divorce. She spent her final years living with her sister, Gloria Smith, in Wilmington, Delaware.