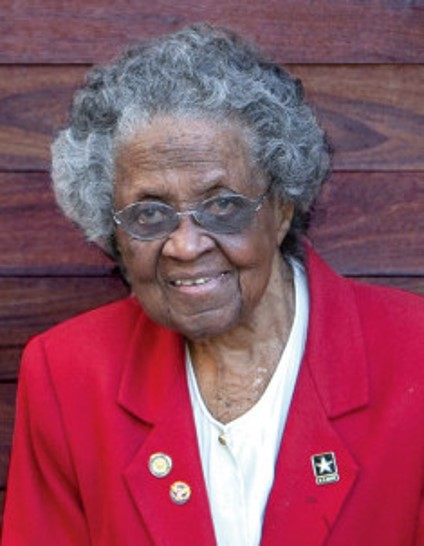 By Anne MacdonaldMay 4, 2022No Comments
News

By Anne MacdonaldMay 4, 2022 No Comments

It is with sadness we share the news that World War II WAC veteran extraordinaire, 1LT Vivian Corbette “Millie” Bailey, died on Sunday, May 1st, at the age of 104.

Millie Baily entered the Women’s Army Auxiliary Corps, later the Women’s Army Corps, in December 1942 and served four years.  During her time on active duty, she served at Fort Sam Houston, Texas, Fort McClellan, Alabama, and later at Fort Benning, Georgia, where she commanded the Women’s Detachment #2.  First Lieutenant Millie Baily’s intelligence, attention to detail, and moral courage served her well, and she earned the admiration and respect of all who knew her.

1LT Baily wore her uniform proudly and walked with dignity navigating the challenges while serving in the deep South. She was nominated to attend the Adjutant General’s School at Fort Sam Houston, Texas, a non-segregated posting.  1LT Baily was honorably discharged in 1946 and earned the Women’s Army Corps Service Medal, the American Campaign Medal, and the World War II Victory Medal.

Following her discharge from the Army, Millie moved to Chicago, where she worked for the Veterans Administration and later the Social Security Administration (SSA).  Millie was a passionate volunteer, community leader, and philanthropist.  Millie was a remarkable individual her whole life.  She made her first parachute jump two years ago when she was 102.

We are grateful for her service and the extraordinary example she set for us.  May her memory be a blessing and an inspiration to all of us.  To read more about her life, go to: https://www.harrywitzkefuneralhome.com/obituary/VivianCorbettMillie-Bailey

Photo: From the Bailey Family Collection