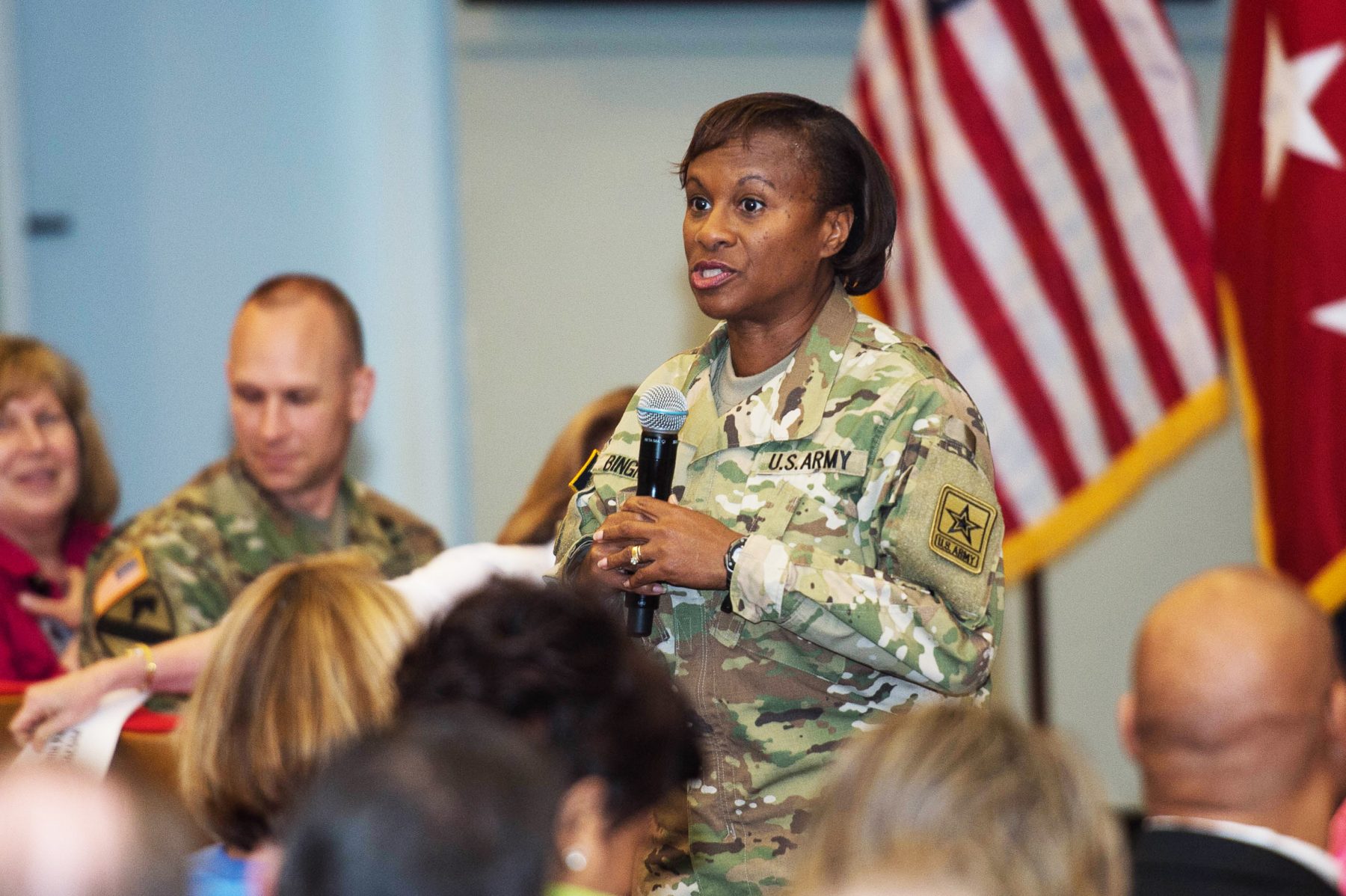 When Gwen Bingham signed up for the Army, she had no plans to stay. More than 30 years later, and wearing three stars, she continues to make history in a long military career that started out in Army ROTC at the University of Alabama.

Bingham broke racial and gender barriers multiple times. She was the first woman garrison commander at Fort Lee, Va.. In November 2010, she became the first woman to serve as Quartermaster General, and with the pinning of her first star in April 2011, she became the first African American woman general officer in the Quartermaster Corps. Over the next few years Bingham continued other “firsts,” in New Mexico and Michigan, and with those achievements came additional promotions.

She earned her third star in 2016 when the Senate confirmed her appointment to Lieutenant General, making her one of the few 3-star female general officers in Army history.

“When I started out I really came in for four years and not a day longer,” Lt. Gen. Bingham told the American Black Journal in a TV interview. “As it was, I literally fell in love not only with the man I married … but I fell in love with this vocation called the U.S. Army. It’s been wonderful ever since.”

Bingham has crisscrossed the globe serving in more than 20 countries. She also worked in support of both Operation Enduring Freedom and Operation Iraqi Freedom.

“For the love of God and country keeps me going, along with all the amazing men and women I’ve had the privilege to team with,” she told KRW news after her appointment.

“It has been a remarkable journey,” she said.

Bingham worked her way up the ranks after graduating on an ROTC scholarship from the University of Alabama. The daughter and niece of U.S. Army soldiers, she worked hard earning promotions to Battalion Commander, Garrison Commander, and chief of staff to the facility’s Commanding General while stationed at Fort Lee, Va. She became the first woman to command the U.S. Army Quartermaster School, which trains Army soldiers on supply and logistics.

In 2011, as the 51st Quartermaster General, Bingham was promoted to Brigadier General. The Quartermaster Corps dates to 1775 and is the oldest combat service support branch in the country. Her military accomplishments continued in 2012 with her appointment as the first woman commander at White Sands Missile Range, in New Mexico. She was promoted to Major General in 2013 while still commanding White Sands. Bingham broke the glass ceiling again when in 2014 she became the first female officer to serve as Commanding General of the U.S. Army Tank-Automotive and Armaments Life Cycle Management Command, in Warren, Michigan.

In 2016, Bingham was promoted to Lieutenant General, and became the 14th U.S. Army assistant chief of staff for installation management (ACSIM). Bingham is principal adviser to the chief of staff overseeing installation management, facilities investments, morale, welfare, recreation and family support programs. The agency also manages the Army’s base realignment and closure and assists with managing the Army’s downsizing efforts. The Army is in the process of reducing its active duty positions to 420,000 troops by 2019.

She is married to Dr. Patrick Bingham. They have two children, a daughter, Tava and son, Phillip.