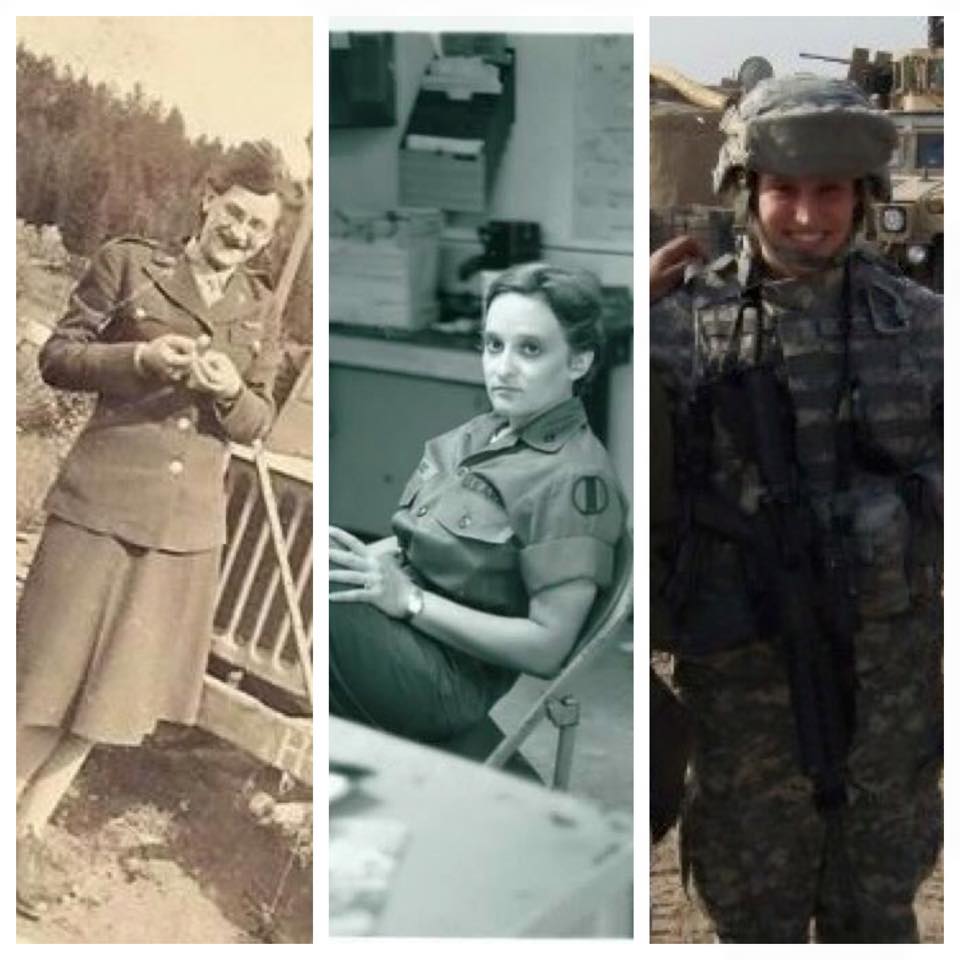 Share Your Story: Three Generations of Women Serving the US Army

By Anne MacdonaldOctober 3, 2020No Comments
News

Share Your Story: Three Generations of Women Serving the US Army

By Anne MacdonaldOctober 3, 2020 No Comments

I am Lieutenant Colonel (Retired) Kathleen Macaluso Powers.  I graduated from the last Women’s Army Corps Officer Basic Course (WACOBC) in December 1972.  I served 11 1/2 years of active duty and retired from the Army Reserves.

I am the middle of three (3) generations of women who have and are continuing to serve in the US Army.

– My mother, 1LT Dorothy Wilhemena (Tonnar) Macaluso, was an Army Nurse with the 110th Evacuation Hospital during World War II. She earned four (4) battle stars during her time in the service.  Her primary responsibility was to stabilize the wounded soldiers for surgery.  Of significant note, a photo of her is on display at the National World War II Museum in New Orleans.  The photo shows her treating a soldier with penicillin.  When penicillin was introduced to the Europe Theater of Operations, her additional duty was to give them their penicillin inoculation.

-One of my stories:

I was in the last WAC Officer Basic Course (WOBC), graduating in December 1972.  I was a Direct Commission 2LT – because ROTC and the military academies were not open to women. Women in the Army were commissioned either through Officer Candidate School (for enlisted) or Direct Commission (the result of having a college degree).  After 1972 and for a few years after, the course was renamed the WAC Officer Orientation Course.  After a tour with WAC Basic Training as a Platoon Officer at Fort McClellan, Alabama, I was detailed to Finance Branch.   If you had a “branch basic” course (which WOBC  was considered to be) and transferred to another branch, you were not required to attend another “branch basic” course.  The exception at the time was Finance Branch because you needed to learn pay and entitlements – basic pay, travel pay, quarters allowances, etc.

Once I completed the Finance Officer Basic Course and the Military Accounting Course, I was assigned to the 27th Finance Section, NATO/SHAPE Support Group, in Mons, Belgium.  Prior to February 1975, the only female officers at SHAPE were nurses and the “WAC Shack” Commander (who was responsible for housing all single enlisted women from the various NATO countries).  I was the first woman officer in the Support Group and, therefore, the first in the Finance Office.  Initially, I was the Disbursing Officer in an eight (8) person office.  I was responsible for the disbursement of a monthly average of $19 million in eight (8) different currencies.  I was 25 years old and had a bachelor’s degree in General Business.

AT THAT TIME, WHERE ELSE WOULD A YOUNG, SINGLE FEMALE WITH “ONLY” AN UNDERGRADUATE DEGREE HAVE HAD THAT RESPONSIBILITY?

I also had to “educate” the command on what women were capable of doing.  The first question was, “What do we do with you?”  This had to do with an issue outside of my office regarding duty rosters.  I told them that I would go on the rosters the same way that other officers were on the rosters.  The Staff Duty Officer was an overnight duty with a driver (male) in the Support Headquarters Building with the requirement to do nightly checks on the SHAPE Headquarters and other buildings (hence the need for a driver).  Once the evening checks were complete, there was a cot where the driver could sleep while the officer answered phones and opened doors to anyone needing access to the building.  The first night that I had duty, it was amazing how many staff officers needed to do extra work that night. – I checked the previous sign-in logs.

That night, while the Operations Officer was “working late” he came down while I answered the secure line from Heidelberg with a coded message which I had to copy and then go to the safe to get the classified book to decode.  As I went down the list, comparing what I had copied to what was in the book, the Operations Officer was looking over my shoulder noticing that the first part was very ominous and the rest not matching at all.  He questioned whether I had copied the message correctly.  When I showed him the bottom corner of the page with the title “Bogus Message”, and the letters and figures matched up, he became quiet and agreed with me.

I have many other great experiences from my time in the Army:  Company Commander of a Basic Combat Training Company (duty MOS Infantry) from January 1978 through March 1979, Community Adjutant for the Frankfurt Military Community from 1982 – 1984 (particularly when the Marine Barracks was bombed in Beirut and the Mortuary Affairs Activity received and processed the deceased – a solemn time).

– Our family’s legacy of service continues.  One of my daughters, MAJ Jennifer Powers Cook, graduated from West Point (’07) and, has served two (2) tours in Iraq and one (1) in Afghanistan. She is still on active duty stationed with the Surgeon General’s Office.

When I think back, prior to 1974, women did not handle weapons, and the general rule was their first tours for enlisted or officers were only to the 48 contiguous states.  How different it is today.  My daughter graduated from West Point in June 2007, and, by Thanksgiving was on her first tour in Iraq.

Pictured in Photo from Left to Right – my mother, 1LT Dorothy Macaluso; me, LTC Kathleen Powers, and my daughter MAJ Jennifer Cook