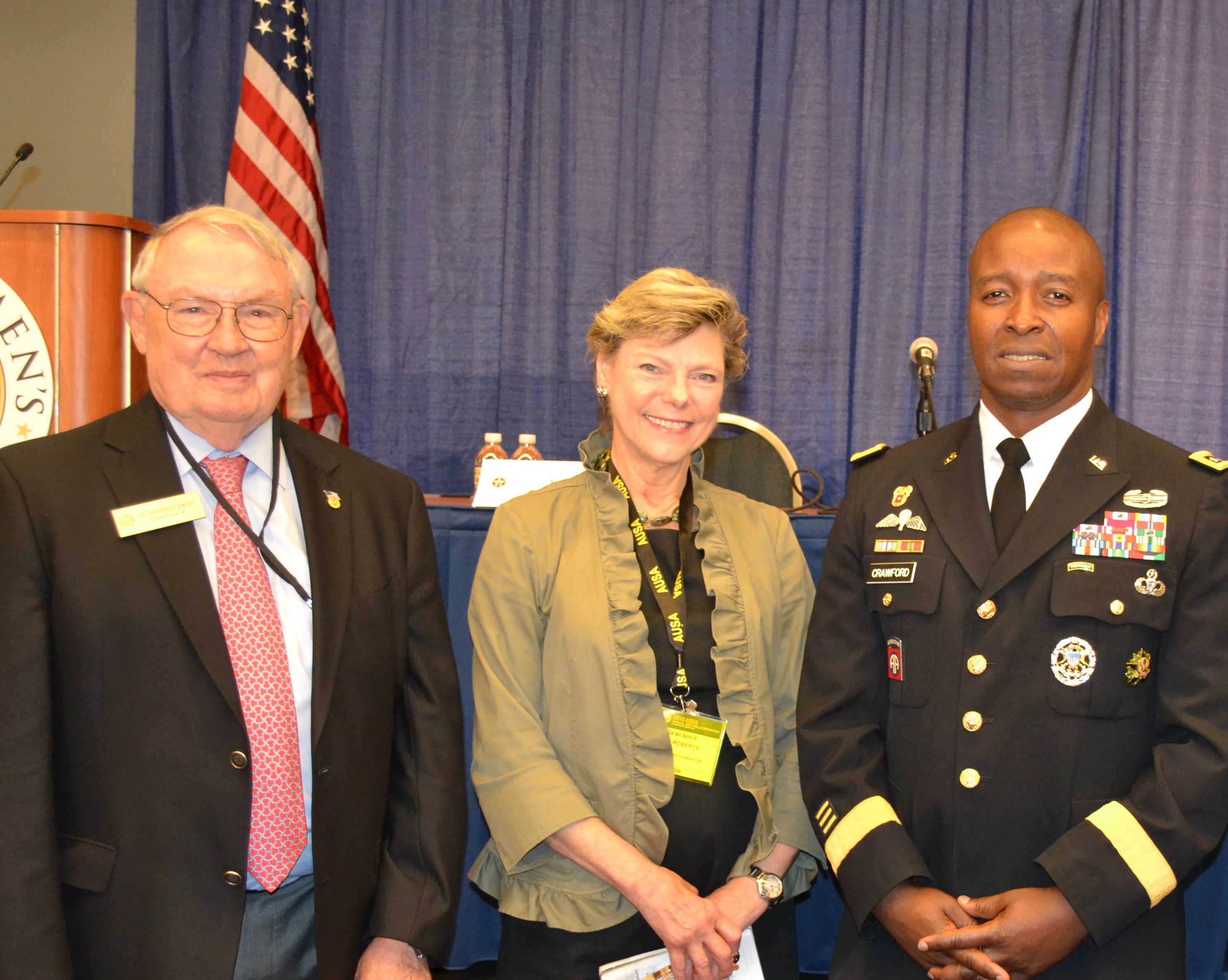 On Monday, October 8, 2018, the U.S. Army Women’s Foundation honored “The Hello Girls” at a leader development program at the 2018 AUSA Annual Meeting.  The “Hello Girls” were Army women switchboard operators who deployed to France in support of GEN Jack Pershing during World War I.  Upon their return, they were not recognized for their service.

LTG Theodore G. Stroup, Jr., USA, Ret. introduced featured speaker, American journalist and author, Ms. Cokie Roberts.  Ms. Roberts told the story of how the “Hello Girls”, fought for decades for the recognition they deserved.  Eventually, women in Congress took up the cause, including her own mother, Congresswoman Lindy Boggs. Ms. Roberts confessed to her audience that, although she writes about women’s history, she had not heard of the “Hello Girls” until recently. She spoke about the history of how they came into being, and talked about the requirements of the “Hello Girls”. In 1917, the request was sent for women telephone operators who spoke French and English. Those selected were sworn into the U.S. Army, given a uniform, and sent to France to provide crucial communication to the front lines. After the war, they returned home only to discover they were not recognition for their service, and were ineligible for any military benefits. Ms. Roberts said that the role that our women have played in the military has affected women in the broader society, and that our military women have made the lives of all women better. She said that women have been in combat all along, and the idea that women were not in combat was just a picture. They have been building bridges, just like the “Hello Girls” did.

After the keynote speech from Ms. Roberts, BG Anne Macdonald, Ret. introduced the documentary “The Hello Girls: The Story of America’s First Female Soldiers”. At the conclusion of the documentary screening, there was a panel discussion moderated by Dr. Francoise Bonnell, Director of the United States Army Women’s Museum. Panelists included Jim Theres, Writer/Director and Executive Producer of “The Hello Girls” documentary; Dr. Sheldon Hochheiser, AT&T Corporate Historian; Ellouise Schottler, Storyteller, Producer, Television Host, and Performer; Carolyn Timbie, Granddaughter of WWI Switchboard Operator Grace Banker. During the panel discussion, Dr. Bonnell asked a question of each of the panelists. Jim Theres discussed how he discovered the story and why he chose to make this documentary. He said that while he was a graduate student, he decided to do a story on WWI men, but he accidentally googled WWI women and Elizabeth Cobbs (author of The Hello Girls: America’s First Women Soldiers) popped up.

Dr. Hochheiser informed the audience why General Pershing turned to AT&T for women telephone operators during WWI. He stated that at that time, AT&T was THE telephone company, and it was recognized in 1913 as a private monopoly. Not only did AT&T provide 13 batallions of technical people to operate in France, they also added existing bi-lingual operators and trained bi-lingual young women as operators to be sent to France. Women also met the needs in the U.S. as operators during the war.

Carolyn Timbie told of discovering her grandmother’s story, and what surprised her about that story. She said that her grandmother (Grace Banker) passed away before she was born, but that she had known the story her entire life. In 2016, Carolyn’s dad received a call from Elizabeth Cobbs requesting information on Grace Banker. Carolyn had her grandmother’s diary, so she sent a copy of it to the author. This led to conversations and meetings between them where Carolyn showed her photographs, documents, letters, and Grace’s uniform. The book was released in 2017, and Carolyn was surprised about the magnitude of the story because it had never been told.

Ellouise Schottler described her work as a storyteller and how she was able to bring voices to the “Hello Girls”. She told of her passion for telling women’s stories, which began when she went back to school in 1968. She learned how to research and answer questions. In 2013, she started one-woman shows at a festival in Washington, D.C.; however, it wasn’t until she investigated Arlington National Cemetery following her husband’s death that she was led to WIMSA and military stories. After reading depositions from Merle Egan (one of the “Hello Girls”), she became captivated by their stories and has since come to love the women in those stories.

Following this discussion was a Q&A with the audience. Jim Theres told of how the panelists met, which was through interviews with Elizabeth Cobbs. Carolyn informed the audience of the ranks of the operators: Chief Operator, Supervising Operator, and Operator. They were above an enlisted man, but below the rank of an Officer. They were respected and saluted, and their rank was on their uniform. Jim Theres also spoke of how he has been sharing the film and the history with a more broad audience. He has been on the Film Festival circuit, and was awarded Best Feature Documentary at a Chicago film festival. He has also been asked by PBS to create a shorter version of the film (24 minutes). In addition, the “Hello Girls” story is part of the U.S. Army Women’s Museum storyline, with collections, documents, and even a display of a WWI switchboard available to view after their Nov. 2 Grand Re-opening.

Jim Theres concluded the Forum by presenting Carolyn Timbie with the plaque he received from the Film Festival. He said that he reads excerpts from Grace’s diary on circuit, and closed the forum by reading her last diary entry from 1918. BG Macdonald made closing remarks and thanked everyone for attending.