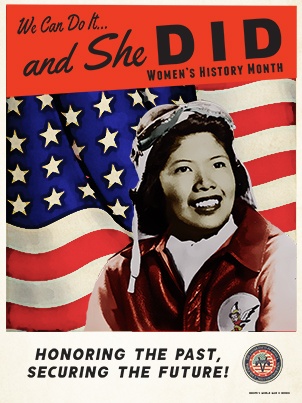 2020 Women’s History Month – Honoring the Past, Securing the Future!

By Anne MacdonaldMarch 2, 2020No Comments
News

2020 Women’s History Month – Honoring the Past, Securing the Future!

By Anne MacdonaldMarch 2, 2020 No Comments

PATRICK AIR FORCE BASE, Fla. – In observance of National Women’s History Month, celebrated each year during the month of March, the Defense Equal Opportunity Management Institute proudly announces the release of original artwork available for download from DEOMI’s public website at www.deomi.org. Women’s History Month honors and celebrates the struggles and achievements of American women throughout the history of the United States. The Department of Defense Women’s History Month poster is the second in a series of posters commemorating the 75th Anniversary of World War II. The Women’s History poster consists of three versions, each of which is identical except for the woman depicted as the
subject of the poster. During World War II, General Dwight D. Eisenhower, then commander of U.S. forces in Europe, declared, “They (women) have met every test and task assigned to them …their contributions in efficiency, skill, spirit, and determination are immeasurable.” The DEOMI Special Observance team wanted to capture the essence of his sentiment. Women not only served in World War II in the Armed Forces but also on the home front. Women’s involvement in the war effort irreversibly changed women’s roles and American
culture. You may take the high-resolution poster image file accompanying this news release to your preferred printing facility for display in your organization or use during your special observance program. All DEOMI special observance poster images are high-resolution and may be used to print posters up to 30 x 40 inches. DEOMI does not have the capability to print or mail posters. All DEOMI observance month poster files are in the public domain unless otherwise indicated.

Credit and thank you go to the Defense Equal Opportunity Management Institute.