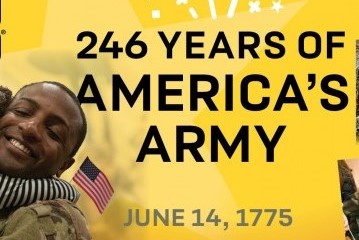 By Anne MacdonaldJune 14, 2021No Comments
News

The U.S. Army was established on June 14, 1775, and this year marks 246 years of the Army’s legacy of service to the nation. That day in 1775 , the Second Continental Congress authorized the first regular U.S. fighting force, the Continental Army. During this year’s  Army Birthday observance, the Army will focus on its people and their accomplishments.   No matter the challenges the Army has faced along with our nation, Army Soldiers and Civilians have had the courage and patriotism to answer the call to serve. Below is a list of this year’s Army Birthday events that will champion stories of bravery, patriotism, and legacy of service.

For a video on the US Army’s Birthday, click here https://youtu.be/i8C527lqoDo